Galahad Clark is a 7th generation cobbler, whose pedigree in shoemaking stems from his Quaker ancestors, who founded the renowned shoe brand Clark’s in 1825. Such an extensive insight into the family business gave rise to a keenness to follow in their footsteps, and he went on to found several footwear brands himself, including United Nude and Terra Plana. But with Galahad’s most recent footwear brand, Vivobarefoot, the tracks he is leaving behind resemble footprints much more than they do shoeprints.

In an expansive conversation, All Together co-founder, Jamie Mitchell, discovers the truth behind this unique shoe business, from its deep roots in nature and extraordinary levels of transparency, all the way to its recent abolishment of traditional hierarchy in a brave attempt to sustain its entrepreneurial energy. A deeply entertaining guest, with challenging insights into the nature of business, Galahad reveals how he and the Vivo team are revolutionising what it means to be a ‘good’ business, and upending thousands of years of shoe orthodoxy at the same time. 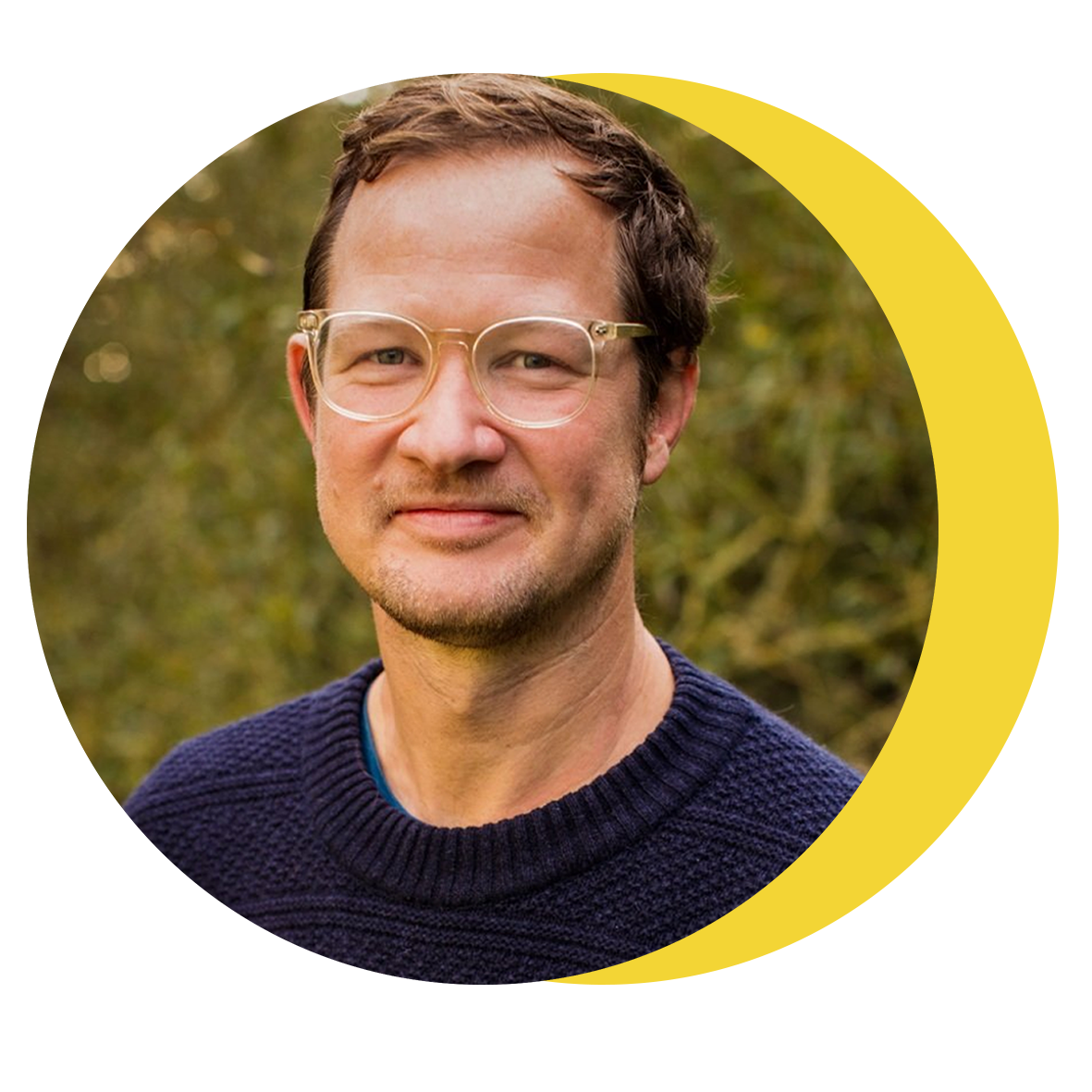 Galahad bleeds purposeful business, and the Quaker values ingrained in him during childhood are clearly the forces responsible for that. “Quakers had these very powerful communities and bonds”, he said. “And they were, in many ways, driven by a higher purpose…Clark’s and the other Quaker businesses of the time were the original social enterprises.”

The Quakers’ influence on business from the 1600s and beyond was pronounced. Cadbury’s, Barclay’s, and Rowntree’s were all founded by Quaker families, and these companies were expected to make a positive impact on society as well as a profit. They strived for continuous improvement, which of course involved developing their products and services like any other business, but their ultimate goal was to make their stakeholders’ lives better.

“The way they ran their businesses back then, how they reinvested their profits and built communities, was truly inspirational for me”, explained Galahad, and he has stayed true to those ethical practices throughout his career. Before Vivobarefoot, for example, he was already in the business of developing eco-friendly footwear, but as soon as he was presented with the barefoot concept, he jumped.

“What was from day one was a love of nature”, Galahad declared, “…I truly believe that we, as humans, are not going to save the planet, it’s going to save us.” And this deep respect and affection is clear to see in Galahad’s professional endeavours. From co-founding the regenerative textile manufacturer, Worn Again, to his role as the director of Soul of Africa, nature has always played a pivotal role in Galahad’s life. So, when presented with an opportunity to bring customers closer to the natural world, he was immediately captivated by the idea.

“A childhood friend reached out to me and told me that he was only ever healthy when he was barefoot”, Galahad recalled. “So, he thought we should be barefoot all the time.” Immediately the cogs of his brain began to turn, and the concept of developing a product that would truly help people and the planet proved too much to resist.

“I instinctively loved the idea…to go where no other shoe had been for at least a few thousand years”, Galahad explained. But that was all it was at that stage, an idea, a suspicion that simpler shoes could be better for us than their ‘protective, well-supported’ counterparts. What Galahad needed was proof, concrete evidence that making shoes to replicate the experience of walking barefoot would be genuinely beneficial.

“[It turns out that] Westerners feet are 60% weaker than their natural base layer”, he revealed, “and if the foot is operating at half its natural strength, then the knees, hips, and other areas of the kinetic chain overcompensate for it…which has a massive impact.”

Impressively, Galahad assured us that we can restore our feet to full strength in as little as six months by going barefoot. And so, for him, it was a no-brainer: to create a product that aligned with so many of his own beliefs surrounding business, nature, and the fate of humanity.

“Businesses are meant to solve problems, not cause them”, Galahad argued. “And for us, it was always about reconnecting people with nature…because the only chance we have of saving ourselves is to get back to nature.”

As part of that belief system, Galahad codified the company values to focus entirely on ‘regenerative’ practices. The goal is to “make profit whilst having a positive impact on societal and environmental health”, have a product that is “regenerative to human feet, human movement, and planetary health”, and nurture a community “that brings people closer to nature and their natural potential.”

Evident in those values are the Quaker principles of honesty, integrity, and simplicity, which Galahad has expertly woven into the very fabric of Vivobarefoot. It’s a company that truly knows and lives its purpose, a problem-solving powerhouse that leverages entrepreneurialism in pursuit of making the world a better place.

The company handbook, ‘The Barefoot Code’, for instance, is an ode to transparency, honesty, responsibility, and communication, qualities the company encourages as much as possible to keep entrepreneurship alive. Ultimately, Galahad wants people in his team that “are close to the customer, can sense an opportunity, and have the wherewithal to go all out to fulfil an exciting customer need.”

The truth is that few companies manage to entwine their purpose and values with their product and culture as well as Vivobarefoot has. Rarely do you see such synergy across an entire enterprise, but Vivo ensures that continues by publishing an annual report, ‘Unfinished Business’, in which it holds itself accountable for every single decision – good or bad – over the last 12 months. The report is a case study in true transparency, a startlingly brilliant blueprint for other businesses to follow.

After toiling to implement the values he considered such a fundamental part of success, a major priority for Galahad was to prevent their decay as the company scaled. He knew scale was necessary for the business to have a meaningful and lasting impact on the world, but growing businesses are cash hungry, so where does he suggest CEOs find the capital they need?

“I’m passionate about businesses fighting and doing everything to stay independent”, he explained. “Don’t accept the short-term capital. Don’t accept the purchase…because as soon as you open the jar, the capital that comes running at you is out of control.” This might seem like a solution rather than a drawback, but Galahad was wary of accepting what he called ‘impatient capital’, insisting that it was often provided by “wolves in sheep’s clothing.”

The right – and in fact, only – solution, according to Galahad, is profitability. “You need to be profitable”, he argued, “you need to be a good business, a regenerative business, with margin…don’t grow until you have a basis to grow from.”

He cited how a lot of businesses forego profitability in their clamour for growth, which ultimately results in them going down the wrong path rather than simply doing the right thing to begin with. The key for him is to hold back on growth until you have a robust philosophy in place, then approach banks who will provide capital with no potentially malignant strings attached.

The latest step Vivobarefoot has introduced to support entrepreneurship epitomises its ethos. The traditional hierarchy has been largely abolished in favour of “circles” – small units assigned to each major area of the business which work to inspire an entrepreneurial attitude.

“We have a team for hiking, for instance”, Galahad shared, “who all really understand hiking. They go hiking themselves and they understand what the latest technologies to do with hiking are.” This structure allows employees to work on what they are most passionate about, vitalising effort and encouraging conscientiousness. They are also free to form their own circles if they have a compelling idea. These ideas are then evaluated by a project council and, if approved, can become major focuses for the company.

This unique structure has been marvellously beneficial for Vivo, as it helps to retain and continuously reinvigorate the entrepreneurial, challenger spirit of the company. Better business is achieved through the continuous support of innovation and creativity, and Vivo is able to provide better products and services – such as its remarkable repair service – for its customers.

Our conversation with Galahad gave rise to an impassioned explanation of how and why businesses should, and can, be better. Vivobarefoot’s success to date is only the beginning, and for the burgeoning CEO or founder, Galahad’s philosophy is a shining example to follow. We can’t wait to see what the future holds for Galahad and his team, but whatever happens, we’re certain the world will be a better place for it.

As ever, we concluded our conversation with Galahad by asking for his Three Things – three pieces of actionable advice – that CEOs can use to make their businesses better, today:

Be a proud rebel.

“Your reason for being as an entrepreneur is to go up against the mainstream”, he claimed. “You’ve got a better way of doing things and you need to show it.” Your desire to do things better should be all encompassing. It should not stop at the innovation of your product or service, but extend beyond to every aspect of your business, to every process and every decision, every step should be re-evaluated and, if necessary, reinvented. In short, don’t be afraid to go against the grain.

Make your decisions in nature.

“We need to recreate a world where humans are not doing stuff to nature, but are being part of nature”, Galahad argued. “Take your teams into nature and make all of your important decisions there.” This might not be viable for all businesses – many are located in cities, after all – but even going for a walk to a café or restaurant is better than staying in the boardroom. Freer, more open environments give rise to decisions of mirroring characteristics, which are often more beneficial for businesses than the constrained choices conceived within the four walls of an office.

Practise natural movement in your business.

“I mean this literally and figuratively”, Galahad clarified. “You should have an upright posture as an individual, but you need a clear structure for your business, with clear roles and responsibilities, even in a flat, networked organisational framework.” To add to that, Galahad also recommended increasing cadence as much as possible across your enterprise. “Get the fear out of the organisation by making people make lots of decisions quickly. As soon as it’s painful, pull back, but it’s about lots of little steps.”

We’d like to thank Galahad for sharing with us his extraordinary insights and perspective on business in what was a truly enlightening conversation. If you would like to listen to it in its entirety, you can do so via Spotify, Apple, or various other platforms.

Is your business facing any of the challenges discussed in this article? Apply to All Together today for up to five hours of pro bono advice from one of Britain’s leading CEOs.